See the Learning Objectives for this lesson.

Before you arrive at class you must have completed the following setup work.

If you are a teacher reading this, please check the Instructor Notes

React is a JavaScript library created by Facebook. It is used for making complex, interactive user interfaces. It has become very popular in the last 5 years.

Why has it become so popular?

What is a component?​

React heavily relies on a concept called "components". Components are like small Lego blocks for designing and developing user interfaces (UI). They can be stuck together in different ways to create new UI.

Let's have a look at an example: the GitHub header. What are the logical "pieces" of UI? What could be a component?

Here we've highlighted some elements that could be components:

There are no hard & fast rules for making components. UIs can be split up into components in many different ways, requiring judgement based on your context. 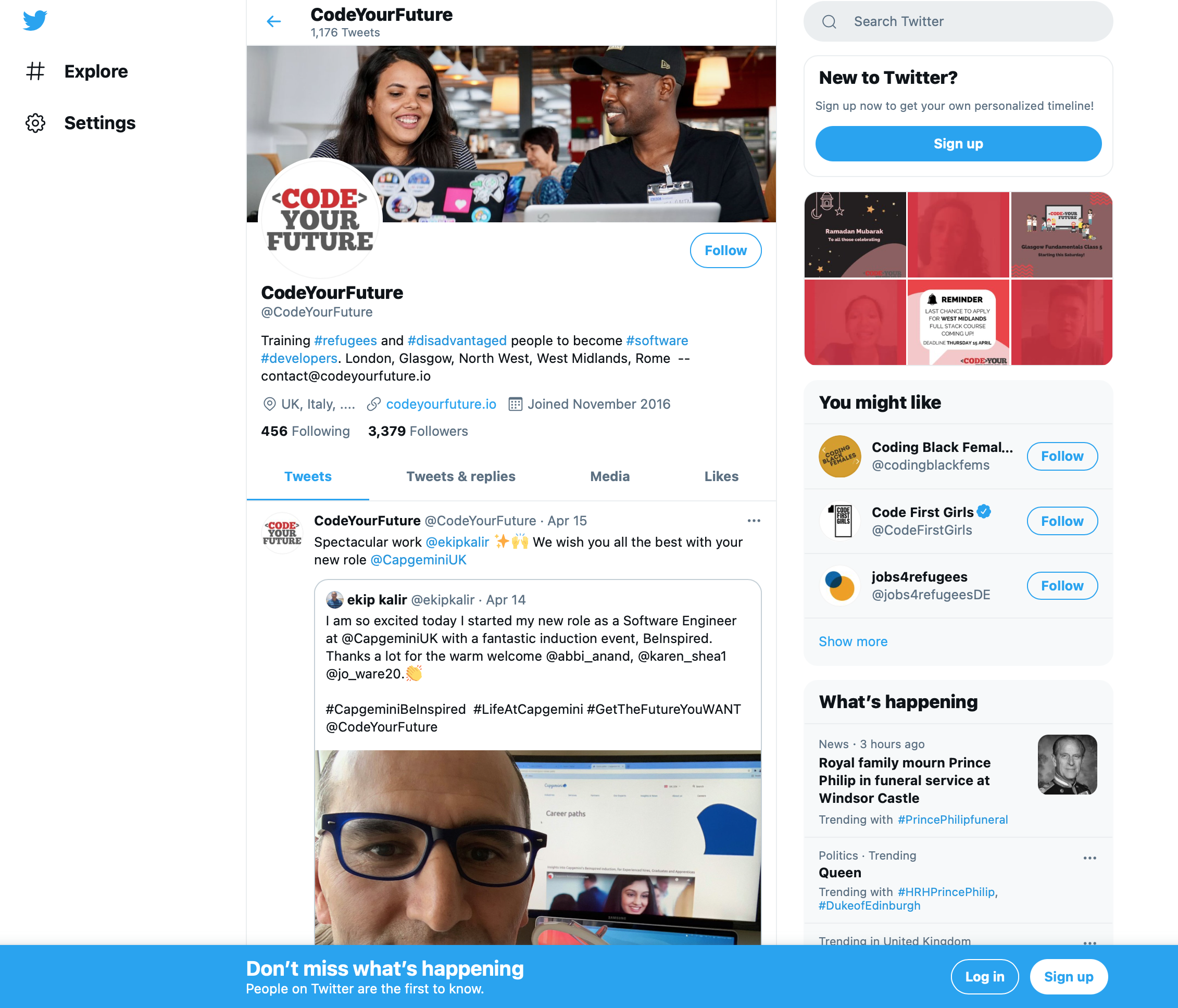 Remember how annoying it was to manage the DOM yourself in our previous lesson? The "vanilla" JavaScript APIs for updating the DOM are quite long and difficult to remember. React makes this easier by manipulating each DOM element itself, instead of you doing it manually. You give React a "description" of the DOM that you want and it will update the DOM for you. React abstracts away the management of the DOM.

Let's take a look at an example. We are going to walk through how to render a <div> with the text "Hello World" within it.

How we could do this using "vanilla" JS? (interactive version):

React is already helping us a bit by cleaning up some of the verbose vanilla JS APIs. However in a typical React application you would still use a lot of the React.createElement function. To improve the developer experience the React team developed JSX.

JSX is a syntax sugar that looks like HTML, but is actually converts to the React.createElement function when you run it.

This is much easier to read than both the straight React.createElement API and the vanilla JS API. Most people using React use JSX to write their components.

Change the JSX example from above to instead render a h1 tag with the text "Hello Code Your Future".

Exercise C (should be completed in prep)​

If you haven't already, follow the instructions to create a React app called pokedex. 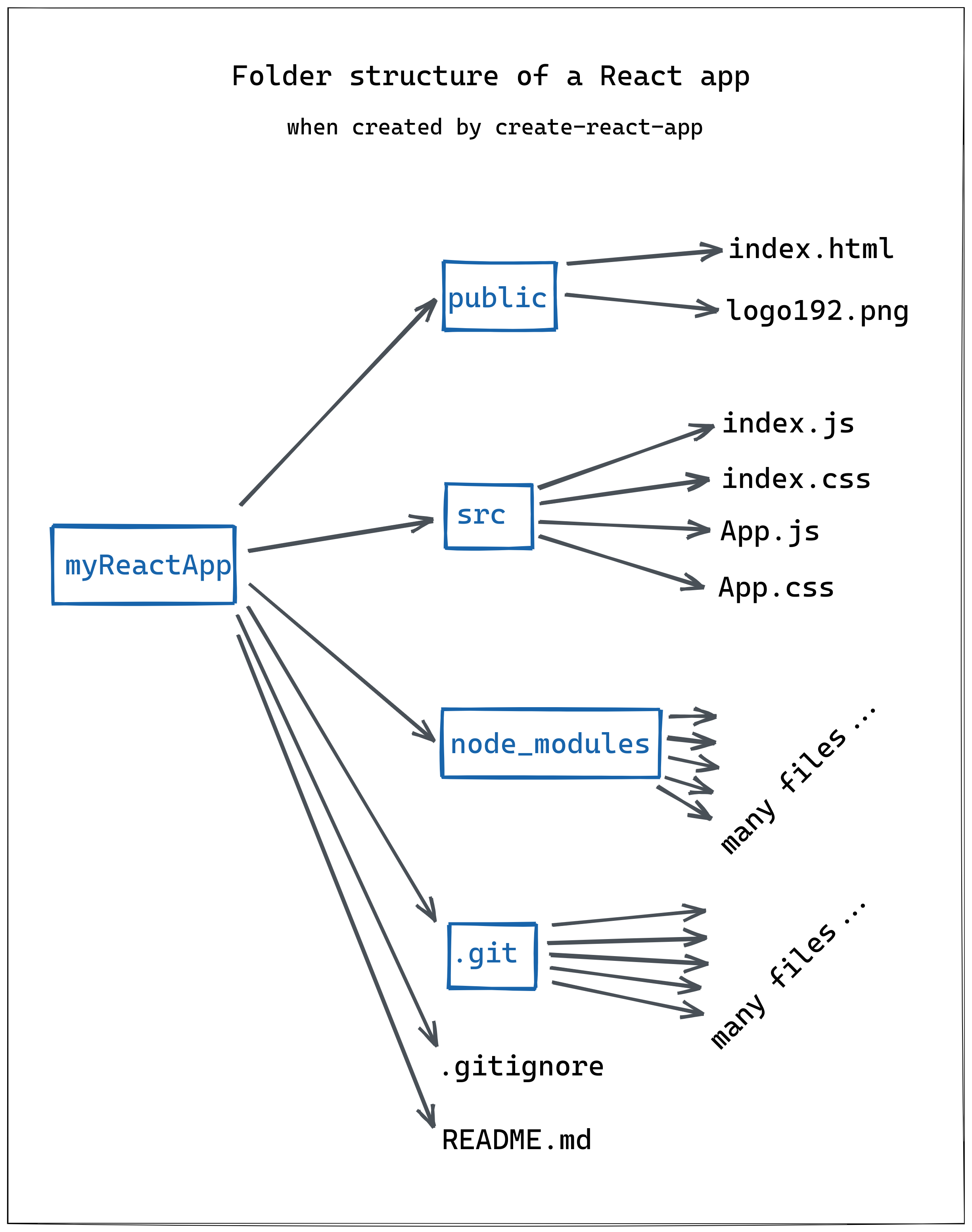 We looked at the beginning of the lesson at the concept of components. Now look at how components are made in React.

There are 3 important parts in this code:

The process of rendering is turning the JSX elements returned by the component function into DOM elements on the screen. This is done by React for you.

In this exercise we replace the placeholder React app with our own. It should look like this:

You can combine a component with another component to render both. This is called composition (interactive example):

We are also using some shorter syntax within the HelloWorld component. <Greeting /> is a shorter way of writing <Greeting></Greeting>, which is useful if we don't need to put anything inside the Greeting component.

Notice how the components that we write (HelloWorld, Greeting, Mentor) are written using a camel case convention and always start with an uppercase letter. And "regular DOM" components (div, span) are always lowercase? This is a convention to let you know whether you are using a "regular DOM component" or a component that you have written. When you're making your own components, you should always start them with an uppercase letter.

In this exercise, we will split out a new Logo component from the App component. And then we'll add a new BestPokemon component:

My favourite Pokemon is Squirtle

You should complete the following steps:

Because a React component is a function, we can also use the arrow function syntax:

This can be even shorter again if we use parentheses and implicit return:

Although this is shorter, it is less flexible as we cannot insert code that is not JSX. Like for example, a console.log:

So we will use arrow functions but we should not use the implicit return for now..

In this exercise, we'll convert the Pokedex app to use arrow functions. It should still look the same in your browser as Exercise E.

So far all of the components we have looked at haven't been able to change - they are hard-coded. But this doesn't make very interesting websites. We want to use variables with different data. We can insert variables (and some other things) into our React components.

Anything in the JSX that is inside curly braces {} is interpreted as a regular JavaScript expression. That means you can use every object or function from JavaScript that we have learned so far. Let's look at an example (interactive example):

Now instead of hard-coding the greeting in the Greeting component, we are using a variable. Remember that everything between the curly braces is just regular JavaScript. So we can use more than just variables (interactive example):

Now we have modified the Mentor component to use the Array.join method so that it lists several mentors' names. This works with other JS types:

A common pattern in React is to use Array.map to loop through a list of items and render a component for each one (interactive example):

In this exercise, we'll change the Logo component to use a variable for the app name. Then we'll add a new component CaughtPokemon which displays today's date. And finally we'll make BestPokemon show a list of abilities:

My favourite Pokemon is Squirtle

You should then complete the following steps

You may have noticed that we are now seeing a red error message in the Dev Tools: Warning: Each child in a list should have a unique "key" prop.. This error happens when you use Array.map to return a list of elements (interactive example):

Here we have added a key prop to the li element. The key prop has a special meaning in React because it is used internally to keep track of which element in the list is which. A documentation page explaining in more depth is in the further reading section.

Organise your code by importing and exporting components. This works in the same way as regular JavaScript import and exports. (interactive example):

We need to export our components to use them in other files:

Name component files exactly the same as the component (including the capital letter). Do this every time.

In this exercise, we'll split the Pokedex app into separate files. It should still look the same in your browser as Exercise G.

Making an argument for Props​

What's the problem with our HelloMentor component above?

The component HelloMentor is static. What if we want to say hello to a different mentor? We would have to change the code too! This is easy in our tiny application but for "real" applications this might be more difficult.

Instead, wouldn't it be good if we could change which mentor we are saying hello to every time we render the component? We could reuse the HelloMentor component for different mentor names. This is what props are for.

Props are what we use in React to pass "arguments" to components. They are very similar to arguments in functions. You can "pass" props to components and you can use those props within a component.

Props are key-value pairs. In this example, the key is name and the value is the string 'Mozafar'. We can pass as many props as we like to a component.

We don't have to use strings; we can use any valid JavaScript data like numbers, arrays and objects. In JSX you can use curly braces {} to inject data that is not a string:

Now look at using props that we have passed to a component (interactive example):

React gives you access to props in the first argument to the component function. We can inject props into our component using curly braces.

The props variable is a normal object with key-value pairs that match what was passed to the component. It is a variable and it can be used like any other variable. That includes injecting props into attributes:

In this exercise, we'll move the variables in Logo, BestPokemon and CaughtPokemon to the App component. Then we'll make App pass those variables as props to the sub-components. Your app should still look the same in your browser as Exercise H.

Inspiration & examples for this module were taken from Kent C. Dodd's Beginner's Guide to ReactJS course.

Please spend two minutes reviewing this lesson to help us improve it for the future. This feedback will be shared with volunteers.