Click here to see the Learning Objectives for this lesson.

Last week we looked at using props and state to create React components that change with user input (interactive example):

Often when you create a React app, you will want to fetch data from an API and display it inside your components. How do we do this in React?

You might think that we could just fetch the data in the component like this, but unfortunately it won't work (interactive example):

This is because React is synchronous, while fetch is asynchronous. If we look in the console, we'll see that the imgSrc will always be null when we try to render it. React will try to render before fetch has had time to get the data from the API.

We need a way of running the fetch call after we have rendered for the first time, so that it is not racing against React updating the DOM. Then once we have got the data back we can use state to tell React to re-render with the new data.

The way we do this is with another Hook, provided by React. This one is called useEffect.

If we look in the console, we'll see that useEffect is also a function like useState.

Often, we will need to use useState and useEffect together. They are imported together like this:

Now let's look at how to use the useEffect Hook (interactive example):

When writing your useEffect, write the "skeleton" first, then fill in the callback function later.

You might have noticed that we still haven't rendered the data from the API. We now need to tell React to re-render once we get the data. This sounds like a job for state!

Let's look an example of how we can use state and useEffect to do this (interactive example):

The timeline of this component is now what we wanted at the start:

You might notice that even though we re-rendered, we did not run the useEffect a second time. The way we've set it up, useEffect will only run after the first time a component renders. We'll look at controlling this in more detail later.

In this exercise, we'll fetch some data about a Pokemon's moves from the Pokemon API and render it a component:

You should complete the following steps:

In the MartianPhotoFetcher component above, we wrapped our JSX inside an if / else statement. This is common practice in React, as it allows us to show something different depending on the situation (for example if there is no data to display, show the user something else instead).

You may also see this done in 2 other ways:

The double ampersand && is used when you don't have an else. The implication is that when the condition is not fulfilled, nothing will render (interactive example):

You'll notice in the && example above, we do not render a 'Loading...' message, because there is no alternative output (no else case).

In this exercise, we'll change the PokemonMoves component to use a ternary operator. Your app should still look the same in your browser as Exercise A.

The Circle of Life​

We now know how to fetch data and render it in our React applications. However, there was a problem with the method that just learned. To understand this problem we first have to understand the lifecycle of a component.

Let's take a look at an example:

Together let's "play computer" to break down exactly what is happening with these components:

Phew! That was a lot of work just to render an image! But we're not quite done yet, we still need to find out what happens when we click the "Fetch image for 2020" button:

To solve this problem, we can tell React to queue the effect on the first render and when a dependency changes. We do this by adding the dependency variable to the array (interactive example):

Now when the photoDate prop changes, React knows that the effect must be run again, this time with the 2020 date. Because of this behaviour, the second argument to useEffect is called the dependencies argument. We use it whenever we have something in our effect function that depends on a variable outside of the effect function.

Here's a diagram showing when the useEffect callback will be run: 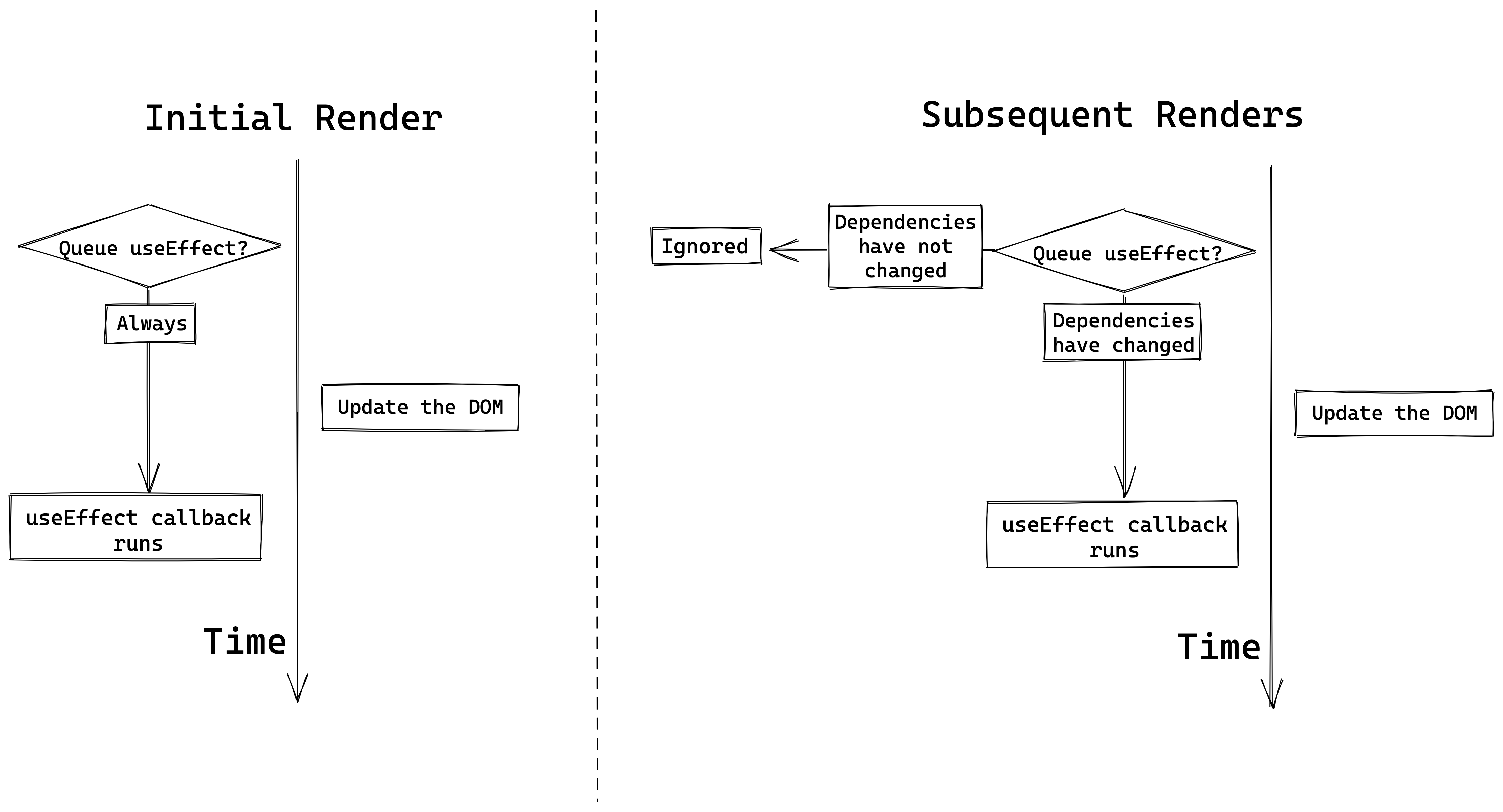 To help you understand this better, try "playing computer" again, but this time think about what happens when we use [props.photoDate] for the dependencies argument. Think carefully about what changes with step 6 after we click the 2020 button.

In this exercise, we'll add some buttons which allow you to select which Pokemon's moves we will fetch from the Pokemon API:

As you may have noticed, VSCode highlighted the empty dependencies array when you changed the URL passed to fetch in PokemonMoves.

This is because your React application is using the rules from eslint-plugin-react-hooks, a package created by the developers who make React. It helps you to find bugs in React Hooks code by highlighting places where you might be missing dependencies.

If you see a red squiggly line underneath your useEffect dependencies array, you can hover your mouse over and it will tell you which variable is missing so you can add it to the dependencies array. Here's an example:

Working with forms in React​

Modern web applications often involve interacting with forms such as creating an account, adding a blog post or posting a comment. This would involve using inputs, buttons and various form elements and being able to get the values entered by users to do something with it (like display them on a page or send them in a POST request). So, how do we do this in React?

A popular pattern for building forms and collect user data is the controlled component pattern. A pattern is a repeated solution to a problem that is useful in multiple similar cases. Let's have a look at an example (interactive example):

We're controlling the value of the input by using the value from the reminder state. This means that we can only change the value by updating the state.

It is done using the onChange attribute and the handleChange function which is called every time the input value changes (typically when a new character is added or removed).

If we didn't call setReminder in the handleChange function, then the input's value would never change and it would appear as if you couldn't type in the input! Finally, the value we keep in the reminder state is displayed on the screen as today's reminder.

In addition, instead of just saving the value of the input in the state, we could have also transformed the string before we set it with setReminder, for example by calling toUpperCase() on the string.

In this exercise, we'll create a new component where you can type in the name of a Pokemon city and see it on screen.

Welcome to the city of

Let's have a look at a more complex example where we want to build a form to let users enter information to create a personal account (interactive example):

We now have three different inputs named username, email and password. There is a corresponding state variable and change handler function for each value.

In this exercise, we will change the CaughtPokemon component so that you can type in the name of a Pokemon that you caught and it will show in the list:

We could make our code a bit shorter if we inlined our event handlers (interactive example):

Sometimes we need to put all of our update logic in one function, maybe because we need to validate the user's input before we set it in state.

We can use a single handleChange function, that is reused to keep track of changes for all of the form fields. To be able to tell which <input> is being updated, we check the event.target.name field. This corresponds to the name attribute on the <input> (e.g. <input name="username">).

Based on this value, we then decide which state to update (interactive example):

So far, our form examples don't have a way of sending the user data back to the server, so that we can store it in the database.

We will be using a special submit event triggered on the <form> element. This event is triggered when the user clicks a submit button or if they hit the Enter key. Let's take a look at an example (interactive example):

The first thing we do inside the handler function is call event.preventDefault(). This is necessary because the browser has a default action when the submit event is triggered on the form to send a GET request to the server. We prevent the default action because we will handle the event ourselves.

We can then do whatever we want with our user data! In this example, we're sending a POST request using the fetch method.

There is a common pattern when loading data in React applications, called container components.

Read more about it here.

There is another common pattern for handling multiple fields in a form, but it requires some JavaScript functionality that you may not have seen before.

Read more about it here.

Click here to view the coursework for this lesson.

Please spend two minutes reviewing this lesson to help us improve it for the future. This feedback will be shared with volunteers.