What does this cover​

This introduction is designed to give you a high-level overview on the basics of testing, which you'll need when you're tackling the problems in your coursework at Code Your Future. In this introduction to testing we'll cover the following things:

Throughout the JS Core modules, we'll use tests in your coursework so it's important you understand what a test is and how they work. The tests will:

Tests are also commonly used by professional software developers, so it's useful to start learning early how to read and interpret them.

Let's consider a function called countWords that needs to work as follows:

In example 1, input stores a string "hello" which we pass as an argument to countWords. We then store the return value of countWords in a variable called output. In this case, we would expect the output to be 1.

In example 2, input stores a string "I think therefore I am", which we pass as an argument to countWords. We then store the return value of countWords in a variable called output. In this case, we would expect the output to be 5.

Write another example with a different input variable. What do you expect the output to be in this case ?

We could keep trying out different versions of input and check the output but real software will often have thousands (or even millions!) of these cases. We can't keep checking all of these ourselves.

This is where automated testing comes in: we could write some more code that checks whether the cases are working as we expect. Let's look at what an automated test looks like.

We're now ready to define what a test is when we're writing software.

🔑 A test is any piece of code that checks a certain unit of code ( typically a function ) behaves in a particular way.

For example, we could write a test to check that countWords behaves in a particular way when passed a string containing a single word. For this example, we're using a popular JavaScript testing framework called Jest to write the test code. We'll examine the example below written using Jest, and then break down the different parts of the test code to understand how it all works.

Let's break down the different parts of this test code.

Anatomy of a test​

We use a function in Jest called test to write a test description - "will count the number of words for a single word string" which describes the behaviour we expect in this particular test. There is also a function function () {} in which we will write our test code. When we run our tests Jest will make the test function available in our file without us declaring it.

The assertion is the part of the test code that actually checks to see if something is true or not. In this example, we are claiming that the following is true:

Notice that the statement above is very similar to the syntax used in the test code.

The function toBe ( which is part of the Jest framework ) is used to check that the return value of countWords("hello") and 1 are equal to each other. There are many other functions like toEqual which we can use to make different assertions.

Finally, our test can either pass or fail.

Don't panic if the tests fail!

Remember: tests are here to help you solve the problem! If you carefully read the test feedback it will tell you what the problem is so you can fix it.

Try creating another test with a different test description to check how countWords behaves in another case.

When thinking about a specification, and what tests you'll need, you should be thinking both about how people would normally use the function, and about unusual examples that may be confusing or surprising (often called "edge cases"). For example, with our countWords example, what should happen when an empty string is used as an argument? What should happen for hyphenated words (e.g. "North-West")? Do numbers count as words ? What should countWords("There were 17 trainees in the North-West class") return ?

Write a test similar to the one above that checks the following behaviour: "numbers aren't counted as separate words in a string"

We can write tests in lots of different ways. Sometimes developers may write additional variabes in order to label some of the values in the test code more clearly. We could re-write the test above in the following way:

In this example, we're declaring some variables that will store values that we compare later on in the test.

It's important to note that the test here and the one above it are checking the exact same thing. The variables are just being used to make the test easier to understand for ourselves and other developers.

Let's suppose we have a project with the following project structure:

We have a project with a directory called tests containing a file countWords.test.js which contains our tests and another file called package.json in the root of the project. We need to find out how we can actually use Jest to run the tests so we can see if they're passing or failing.

We often need to use packages of code written by other developers in our project - otherwise coding would be a very time consuming endeavour indeed! We can download and install these libraries in our project so we can use them when we're building software. We call these libraries of code dependencies - libraries of code that we depend on when we're writing our code. For example, if we're using Jest to write our tests, then we'd say that Jest is one of our dependencies.

npm is a tool that is used to download and install dependecies in a project. We can use npm to install Jest with the following command:

Ensure you're at the root of the project (where the package.json is ) before running this command.

You'll learn more about npm and how it works later on in the course.

Our project structure will now look as follows:

Finally we'll need to run our tests. We can check the package.json for a section called "scripts", see below:

This section is where we'll store some commands that we can use in our project. We'll need to update the package.json so that it reads as follows:

Now we can run the following command in our terminal ( whilst at the root of our project ):

This should run our tests and then provide us with feedback about how our code is working.

Consider an extract from the test file countWords.test.js

After the test has run, we will get some feedback from Jest depending on whether the test passed or failed. If the test fails then we should expect to see something like this: 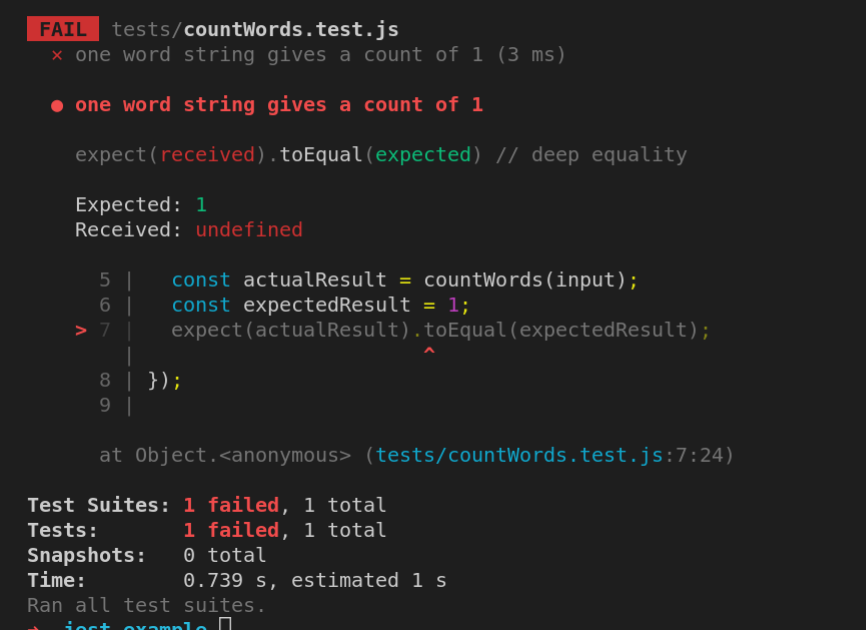 If the test passes, then we should get some feedback that looks like this:

Jest aims to give feedback that makes it simple to see why test has failed. It shows us several things:

We can see the test feedback is telling us that received is undefined. In other words, actualResult ( countWords's return value) is undefined.

How could you update the function countWords to ensure it passes the test shown at the top of this section. Hint: Think about the function's return value.