What we will learn today?

Download and install MongoDb from https://www.mongodb.com/download-center#community. Follow the instructions for your platform (Windows, Linux or OS X).

Open two instances of terminal. Run mongod—this will start MongoDB then run mongo on the other window.

In the mongo shell (terminal), run the command version() and you should get the version of Mongo printed on the terminal

Relational databases include MySQL, Postgres, Microsoft SQL Server, Oracle Database and many others. They've been around for a long time and they're used for all kind of applications.

Non-relational databases are relatively new and they include the likes of MongoDB, Casandra, Neo4j etc...

In a Relational database, information is organised in rows in tables with predefined columns.

In a non-relational database, information is organised in documents. MongoDB stores data records in a format similar to JSON called BSON. BSON is a binary representation of JSON documents, though it contains more data types than JSON.

Exercise: What are the columns, rows and tables? 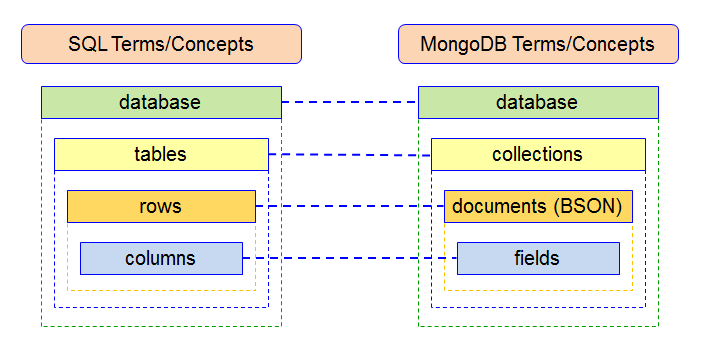 Exercise: Open https://jsonlint.com/ and write a JSON representation of two rows in the Students table example. Click Validate JSON and make sure the document is valid.

BSON is very similar to JSON. It contains more data types than JSON, it also allows the field names to not be quoted. Read more information about the format: https://docs.mongodb.com/manual/core/document/.

Let's go to mongo shell and start interacting with our database system.

On the shell, type the command use profile The shell should respond with switched to db profile. At this stage, the database does not necessarily exist once we start adding information (collections) then the database will be created and the collection added to them.

Now let's create our first collection. Make sure you're using the profile database. Run db and it should print profile on the terminal.

We will insert a simple document representing a student.

You should get a confirmation with the number of records inserted.

You can also insert more than one document at a time. Run this command

run the command db.students.count() and you should get that you have 3 documents.

Querying is one of the most important reasons that we use databases. SQL is the language used for querying relational databases, In MongoDB, we can use the method db.collection.find, passing a query in the form of a JSON object as a first parameter.

Get all the students from Ethiopia.

We can also provide an extra parameter projection to define what fields we want back from the query.

For example, if we're only interested in the name

Let's add another two students to the collection

Now let's query for all the students that have Michael as mentor.

What if we want to find any student whose name is "Mohamed" AND whose country is "Sudan". You can then use the logical query operator \$and.

Notice that name and country are case-sensitive.

In Mongo, a database contains collections that contain BSON documents. We can use the mongo shell to interact with our Mongo databases. The query documents are used to specify a selection filter using query operators to search for documents in the collections.

Checkpoint: Do you understand all the words highlighed in the last paragraph?

So far we've been connecting to Mongo using the Mongo shell. Mongo has drivers for most major programming languages but it's especially popular with NodeJS applications as its API and Query model is very close to JavaScript syntax and patterns.

Let's start wiring Node with MongoDB as a datastore.

Go to the file controllers/apiController, on top of the file, require the module

then add an endpoint for /students

Go to your browser /api/students and you should see a JSON containing the documents we've added to the students collection earlier.

Exercise: Let's step through the previous code and understand it line by line.

Now let's change the api/posts to also use the mongo database instead of the json file under /data.

Even though our code does what's supposed to do, it has several issues. We have a lot of duplicate code—both endpoints GET /api/posts and GET / do the same call to the database and then do something with it. It's only that something (the callback) that is different so let's refactor the code to eliminate duplication (DRY).

Let's deploy our Database-Driven Application to Heroku. If you don't remember the steps, refresh your memory from a previous lesson.

Once you're finished, Go to your application on heroku and see if it is working properly.

It should not be working.

Can you have a guess on what went wrong? To see what's happening on the heroku server, run heroku logs from the terminal and check the logs.

Heroku, AWS and other cloud services allows us to use databases and other services on the cloud without having to maintain physical servers making it easy to scale, monitor costs and build good solutions in general.

In NodeJS, The process.env property returns an object containing the user environment. Environment variables allow us to configure different aspects of our application based on the environment where it's running—so for instance, when we run our application locally, we want to connect to the local MongoDB but on Heroku, we want to connect to a different one.

Connection strings are typically saved and used as Environment variables, other typical uses are with passwords, secrets, URLs of other services etc... Anything that is environment specific and that shouldn't live in the source code.

Security tip: Never add passwords, connection strings or any sensitive information in your source code, always use an Environment variable.

Services like Heroku and AWS can then use these environment variables to configure aspects of the application.

We've already used one Environment variable for Heroku before—what was it?

Exercise: Use the environment MongoDB_URI to connect to MongoDB on Heroku, but fallback to localhost connection string if there is no environment variable provided.

Refer to the MongoDB/Node workshop for the Homework tasks - https://github.com/CodeYourFuture/mongo-node-workshop